The Eight of Cups represents moving on and the hesitation that often comes when it's time to commit to something like weight loss. Changing up your habits and patterns is a necessary part of losing weight and it's natural to hesitate when the time comes to change or walk away from something. Eating right and exercising requires a change in your emotional diet as well. Of course, getting fit and losing weight still requires a strict nutritional diet and regular excecise.

The biggest block to weight loss is negative self-talk. We get stuck in emotional patterns and those patterns are the true key to losing weight. It's a lot easier to eat healthily and work out when you feel good about yourself and care enough about your health to make the changes necessary. Instead of making weight loss a chore, try changing your mental image of yourself first and watch how easy it becomes to stay healthy and slim! 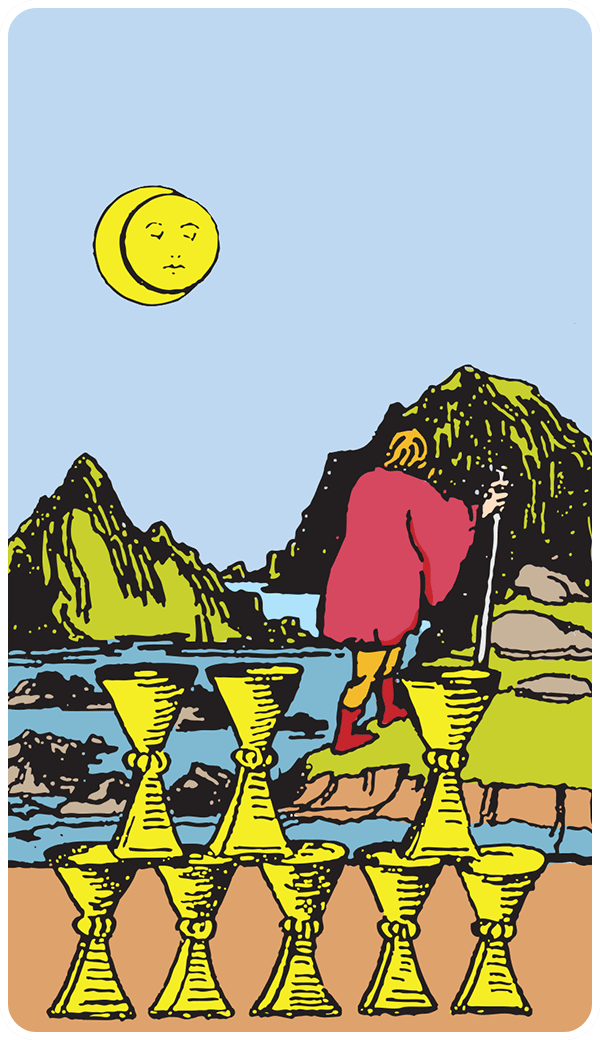 Humans have little signs they throw off when they're ready to move on. Many people in relationships say they knew weeks before a break-up that it was coming. You can tell when a class should be dismissed by the fidgeting of the students. You can tell someone will quit a job through disinterest and tardiness.

When you begin slowly dislodging yourself or unburdening yourself from the actions and behavior you've lived with before, it's a sign that you're ready to head onward. We can all feel when it's time to move on – the Eight of Cups embodies that moment.

On the Eight of Cups we see a series of mountain peaks dotted across the landscape – the full moon shines over them. In the foreground are a series of cups, piled all around and on top of one another. Just behind them is a man with his back turned to the cups. He seems ready to climb to the next peak, walking stick in hand. His shoulders are slightly hunched, perhaps with the weight of a personal burden. He does not, however, look back to the cups – he only looks forward.

This card signals that it is time you move past something. Every life has stages, and each stage builds on top of the next – you can only journey forward once you're ready to use what you've learned from your past to build a future. You'll know when you're ready to move on – the antsy, fidgety, dismissive behaviors will already be evident. Take these signs to heart, and know that it's ok to leave certain things behind.


If your energy is low, the Eight of Cups may be telling you to keep a watchful eye on yourself. Are you running yourself ragged? Forcing yourself to follow through with things that you no longer feel are right for you? These are the aforementioned signs of needing to move on from an area in your life. This energy will drag you down if you continue to live in it – this card may be calling you to action.

Moving on Doesn't have to be Hard

The Eight of Cups has a lot in common with the Six of Swords. Both the Eight and Six cards signify movement, either through or away from something. They also both tend to come packaged with a negative mood or attitude – this is most likely because moving past something is difficult, and likely to bring out harsh emotions.

What Eight of Cups Means for You Today

Are you feeling stuck in the past? The Eight of Cups can signify heavy memories that are weighing you down and influencing your opinion of yourself. This card appearing in your reading is a sign that it's time to sit down and face your feelings and stop trying to escape from them. The pain only lasts for a few minutes when you resolve to accept and process the hurts from the past. When you run from your feelings they will chase you to the end of the earth, but when you turn around a look at them they will dissolve before your eyes.