Selfishness is a trait of the Five of Swords and refusing to save water can be a sign of a selfish person. There is only so much water to go around and wasting water can lead to real problems in the world. If we don't learn to save water we could face a water crisis on this planet which could lead to unthinkable conflict. Conserving water is easy and requires very little effort on your part. Restricting your water usage can also save you money on your utility bills.

Following water conservation tips like turning off the water while brushing your teeth or limiting your shower times can help save water and avoid waste. Don't be like the person in the 5 of swords and do your part to save the planet from water shortage. 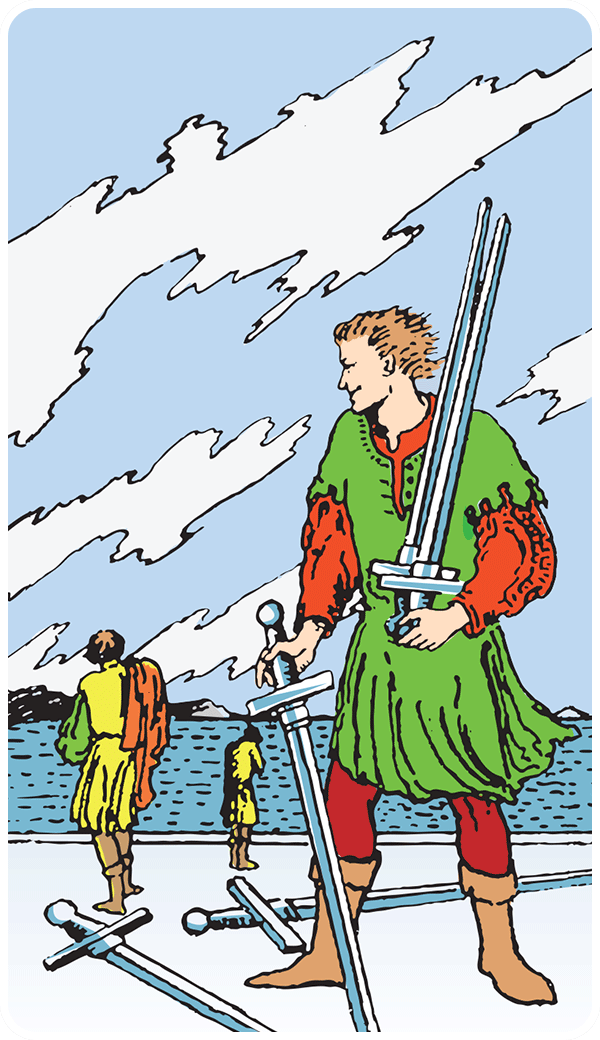 When we are children, the concept of 'yours' versus 'mine' isn't one we can differentiate between – everything an infant or toddler sees is immediately labeled as theirs. It's no surprise, then, when we see a kid toddling up to another and taking what they have. Crying begins, parents try to soothe the kids, and often they give what was taken back to its rightful owner.

What happens when the parents don't notice? The injustice flies under the radar as a young child has no words to communicate what happened, they can simply cry and understand that what occurred was wrong and unfair. The other child, of course, often doesn't even register that what they did was wrong at all. This is the energy of the Five of Swords.

Before us we see a distant body of water, an area of level ground, and a great, wide, open sky. In the foreground is a man, holding a total of three swords – two against his shoulder, and one propped up against the ground. There are two more swords on the ground at this man's feet. The man has a gleeful, almost smug look on his face. This man is looking at two other distant figures who are presumably the two men whom he got his swords from. The one nearer man has his shoulders slumped in a sad fashion, the further one appears to be weeping.

There are two equal sides in this card when it comes to meaning – the man who holds all the swords, and the men who have lost theirs. As you go through your reading, try to figure out which side represents your own personal situation.


The Five of Swords is all about the winning and the losing sides. This card doesn't say which side you are on, but it expresses the situation fully and allows you to sort through the details. Often, this card signals that someone in your life (whether it is you or otherwise) has been being cruel in the way that they won, taking what doesn't rightfully belong to them, and perhaps even lording it over the losers. Of course, this means that you could be on the losing side as well, falling to that cruel person.

This card can also point to an injustice present somewhere in your life. You may have wronged someone, or have been wronged yourself. Lastly, this card can signify the presence of selfishness and gloating. Take a step back from your own life, and see which side you stand on – are you suffering under the hand of selfishness, or have you been gloating yourself? Whatever the case, this card begs for balance and that all wrongs be put right.

What Five of Swords Means for You Today

When the Five of Swords shows up in your reading it can be a sign to step back and assess your role in a situation. It can also signify frustration and anger that can come with feelings of defeat or being mistreated. If a conflict arises today, try to wait until you are no longer angry before you react or take action. If you find that you are the one who is victorious over another person in some way, try to be a graceful winner and refrain from gloating or bragging. If you are the one feeling defeated, don't let your ego get the best of you and try to let it go.