The Two of Pentacles can show that you might want to get some pre-paid cards. Pre-paid cards can help you protect your money if there are debt collectors trying to take money from your accounts without permission. A pre-paid card usually has a small monthly fee, but it's much lower than the fees that big banks will charge you. Walmart, paypal, and many other companies offer pre-paid debit cards.

Cash cards come with their own account number and routing number so you can get direct deposit from your job without having to have a regular bank account. If you owe debts that you can't pay off most banks won't give you a new account, but anyone can use a pre-paid card no matter what your credit history looks like. 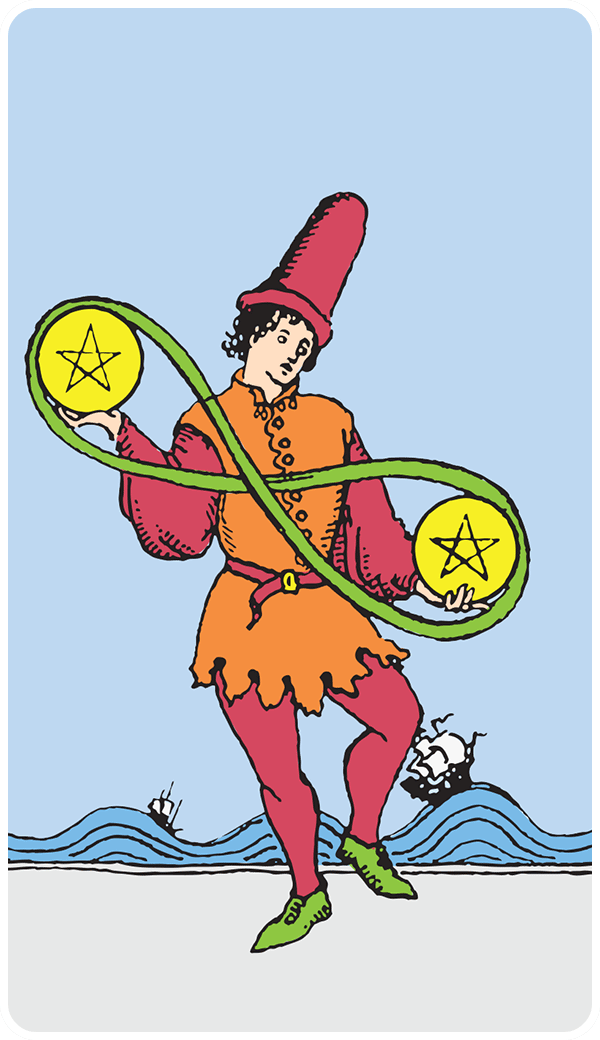 Not everyone has seen a juggler who his or her magic. Juggling itself is something fantastic to behold, and even more wonderful to partake in. When you juggle, your muscles have to act almost instinctively in order to catch whatever it is you're throwing. You begin to trust your body so much that, with barely a glance in the direction of a ball or pin, you know you can catch it and throw it up again with ease. It's almost as if your body is acting on its own, working towards a goal you're not entirely aware of.

On the Two of Pentacles we see a juggler, desperately trying to keep his two coins in motion. The man wears a red outfit similar to one who is in the circus, with a tall red hat on his head (which more than likely makes it even harder to juggle). The man's face seems to say it all – he's worried he will drop one at any moment. What happens then? In the background we can see a tumultuous ocean – two ships are caught in the up and down of the waves.

This card is the card for keeping things in balance. The juggler needs to keep his coins in the air, always moving and never fumbling. What will happen if he doesn't? Who can say? All he knows is that it's essential for his continued existence.

Perhaps some great king is paying his wage in order to juggle successfully, or perhaps he is simply practicing and needs to keep juggling for his own peace of mind. No matter what the reason, the juggler asks for you to keep an element in your life (or perhaps your whole life entirely) in balance, never putting one thing over the other.


The Two of Pentacles may also be signaling a need for you to go with the flow. A juggler doesn't doubt his movements – he can't, as if he does his muscles will freeze and the coins will fall. He simply has to move as he's bid. If the coin moves in a direction he wasn't expecting, he still has to lunge in order to catch it! Take advice from the juggler – be flexible, and go with the flow in your life.

Between a Rock and a Hard Place

Lastly, this card could point out that, recently, you've been feeling as though you are bending over backward for others. Overwhelmed by how many things you have to do, you feel as if you are juggling all of your tasks, trying to keep them all from crashing down. The only way to lessen your load is to lighten yourself of one of the coins you juggle – that is to say, give up one or two tasks that you are now trying to manage. When you have less to juggle, you'll find it an easier task.

Here are a few questions to help you analyze the Two of Pentacles. How is the flow in your life? Do you feel overwhelmed by your number of tasks? Are things not going according to plan? How difficult is it for you to go with the flow? Or, perhaps, are you trying to pursue availability and flexibility that you don't yet possess? How can you attain the balance that the juggler has?

Temperance and the Two of Pentacles have the most in common with each other – each tells the reader to achieve a sense of balance in their lives. In a way, the World can also be paired with the Two of Pentacles – after all, if you feel as though you have the world on your shoulders, this would be a great way to express that feeling.

What Two of Pentacles Means for You Today

When the Two of Pentacles shows up in your reading it can be a sign that you are going to encounter the physical manifestation of an energetic blockage. This can manifest as money problems, a chronic pain in your body that never seems to go away, or some other obstacle. When you come upon a situation you can't seem to change or overcome, the root of the problem probably comes from an emotional/energetic blockage in your aura. The clear these obstacles you must identify the emotion the situation evokes in you, then meditate on the place in your body where it feels strongest until the emotion fades.