The Six of Cups can bring a sense of nostalgia, like playing an old online video game you used to love as a kid. The innocent and carefree attitude of childhood is embodied in online games. You can tap into that old playful attitude by starting a new character in your favorite game and revisiting some of those joyful gaming moments. Today there are hundreds of online games to choose from like world of warcraft, guild wars, or even Minecraft.

Some online video games can even help you make some extra money but it will take a lot of time and dedication to doing so. Massive Multiplayer Online games are often known as MMOs and these games contain hundreds of hours of content for you to explore. Some games require you to pay a monthly subscription but some are free to play. 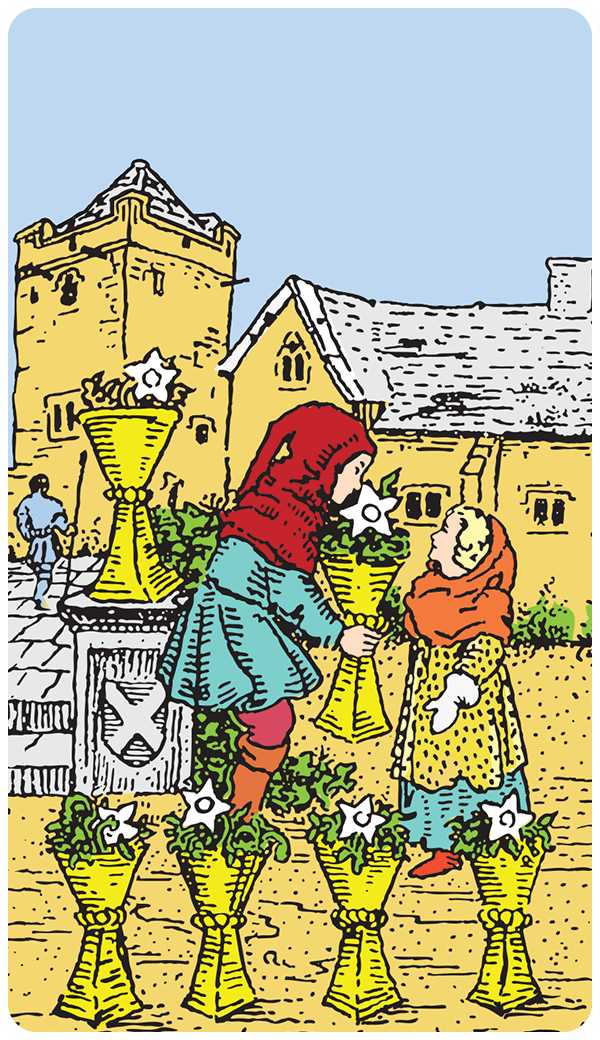 Our society loves young love. We share pictures of a little boy holding the hand of a little girl. We tell stories of that time when our five-year-old cousin kissed the nose of that young girl who lives down the street. Why this fascination? We crave the innocent. We desire to be closer to things that we know have no ill will. In a world filled with the unfamiliar and the potentially dangerous, we love seeing a young boy and girl before many negative influences have touched them. This innocent energy is the energy of the Six of Cups.

In this card, we stand in the midst of a town central – buildings and houses tower above us, and a guard walks by down the road. Before us are a series of flowers held in beautiful cups. One such cup of flowers is held by a small boy, no older than ten. He is handing the cup sweetly to a little girl of the same age. She smiles at the gift as she reaches up to take it. Altogether, this display makes for a touching scene.

Innocence. We strive for it, but do we really know what it looks like? Some people argue that children are innocent, but even they can't escape the influence of their parents and the media that surrounds them. We may never get to see pure, true innocence, but we can see what it might look like in the actions of the young.

When you pull the Six of Cups, remember how important innocence is to our lives. We all have that youth at heart, we just have to dig down deep. A level of innocence can be found within us all, if we can manage to chip away at the jaded, cold lessons we have learned.


This card can also represent a giving nature – after all, the boy is handing the girl those flowers, and there is no monetary transaction to be seen. Presumably, he's simply giving her the flowers for free. You can almost see a young girl, staring at the beautiful buds longingly, but not a penny to her name. Giving of ourselves freely never turns out poorly. This card calls for you to give of yourself freely, especially your emotions (cups stand for emotion).

Lastly, this card can herald in young, innocent, fresh love. You know... the type of love where you sit next to each other, giggling, smiling, maybe even not saying a word because of how shy or nervous you are. This love is deep, but it's young – it hasn't had the chance to set down roots yet. This also means the people haven't had a chance to develop judgments, patterns, or otherwise. This kind of love should not necessarily be sought after, but it's a love that comes along at least once in every person's life.

When you see the Six of Cups, ask yourself some gentle, loving questions. What does innocence mean to you? Is an innocent nature possible in your life? Why or why not? Can you freely give of yourself? What benefits could you see if you do give emotionally? Can you feel innocent love towards another?

What card has the hope and innocence of the Six of Cups? One of them is the Star card. The Star is infused with hopeful, radiant, glowing energy – the Six of Cups shares in that vivacious energy. The Fool is very similar in many ways to the Six of Cups – the innocence and trust that is shared between the two young people on the Six is also felt by the man on the Fool card.

What Six of Cups Means for You Today

When the Six of Cups shows up in a reading it can mean that some element of the past may show up soon. Whether this is an old memory or a person from the past is not entirely clear but there will certainly be an emotional aspect to this encounter. This card can also indicate emotional healing that brings you closer to your old child-like self. This does not mean regression into an immature version of yourself but a return to a more carefree and spontaneous state of mind. Pay attention to anything that sparks or triggers feelings that you thought you had left behind.