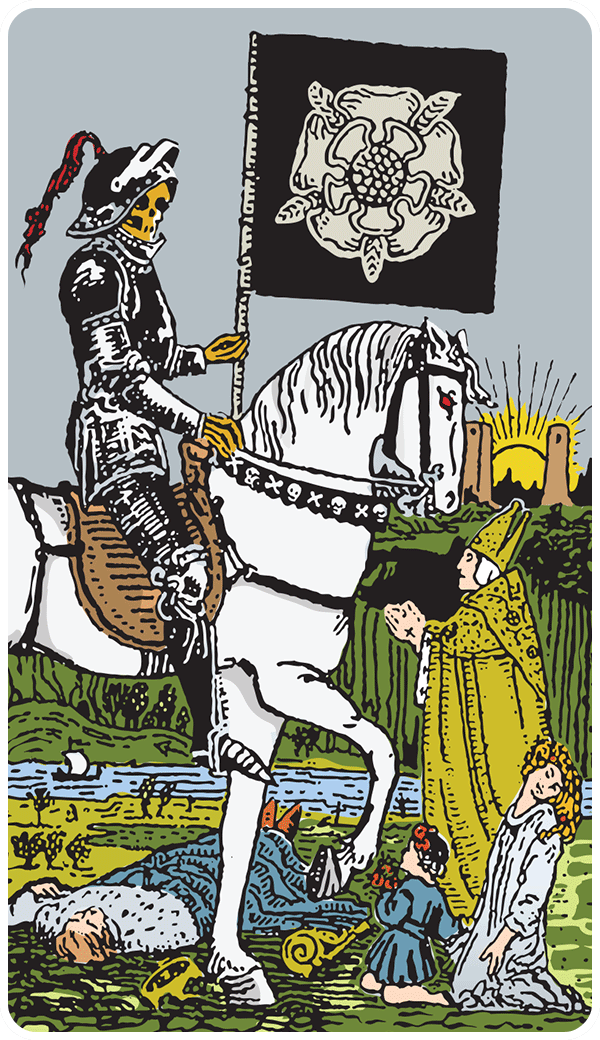 The Death card does not foretell physical death, so it does not mean that you or your loved one will pass away. Rather, the card speaks to death and endings being a natural part of life, and that it is time to let go of what you no longer need to create room for the new.

We get a phone call telling us of a loved one's passing. We watch our aged family members slowly prepare themselves for that next stage of life. We see the death of a beloved pet. Even our hopes, dreams, and passions can die. The Death card is rarely the herald of a sudden, unexpected doom... but it can hit, and it can leave its mark. What many don't note about the Death card is that its meaning does not only mark an ending but a brand new beginning as well.

On the face of Death we see a dark, armored rider on a white horse – a pale yellow skeleton. He holds in his hand a large black flag with a white rose on it. At the feet of the horse lies a king, trampled and dead. Around him are mourners – a member of the church (most likely praying for the dead/dying man), and two small children, a boy and a girl. The little boy looks up at Death, intrigued but frightened. The little girl, however, is looking away over her shoulder. The sun is setting behind them, blasting out its final rays... or is it the sunrise? Who can say for sure?


The death card, most commonly, marks an incoming transition. We get accustomed to how we live our lives, going through a certain set of motions over and over. When those motions are thrown for a whirl by an unexpected parting of ways, any number of reactions is likely to hit. This card signals that something within your life is going to change, but it will be replaced by something new and unexpected. This can mean the death of someone close but more commonly it refers to a job, a house, a relationship, or feeling, an idea, and so on.

Death is Not The End But Only a Transition

Yes, Death marks an ending. This card is telling you about an end stage of your life. As we all know, however, life doesn't only have one stage. The child turns into the maiden, the maiden into the mother, and the mother into the crone. It's simply the way of things. While you're keeping watch for this ending, be sure to embrace the new that will come along with it.

Here are a few questions to ask yourself when pulling this card. Can I be flexible enough to let go of what is dying? Can I be brave enough to accept the new without reservation? What steps will I need to go through to properly mourn that which is lost?

The Eight of Cups has a mournful feeling to it – a feeling of moving on and passing through something difficult, like the Death card. While the Eight generally signifies moving on completely from something in your life, Death signals both endings and beginnings that inhabit the same space... meaning that you might not have to travel anywhere to experience a new start. The Five of Cups also speaks of loss, though it speaks more of sorrow and regret than the Death card.

What Death Means for You Today

Death is a symbol of complete transformation and plunging into the unknown. We tend to fear uncertainty as if death is looming around every corner. Seeing this card in your reading seldom foretells physical death, but a symbolic death of some aspect of the ego. In some spiritual circles, it is said that enlightenment is the experience of 'dying before you die'. Letting go is scary but ultimately it leads to more peace of mind. Do not fear the changes coming up in your life. Embrace the unknown and experience the mysteries of self-transformation.