The Two of Wands can mean defending yourself and what better way to do that than with home security? Home security systems give you the added peace of mind of being able to monitor and protect your family and your beloved material possessions at all times. Now is the perfect time to install a home security system with wireless cameras, Security alarms, and much more. 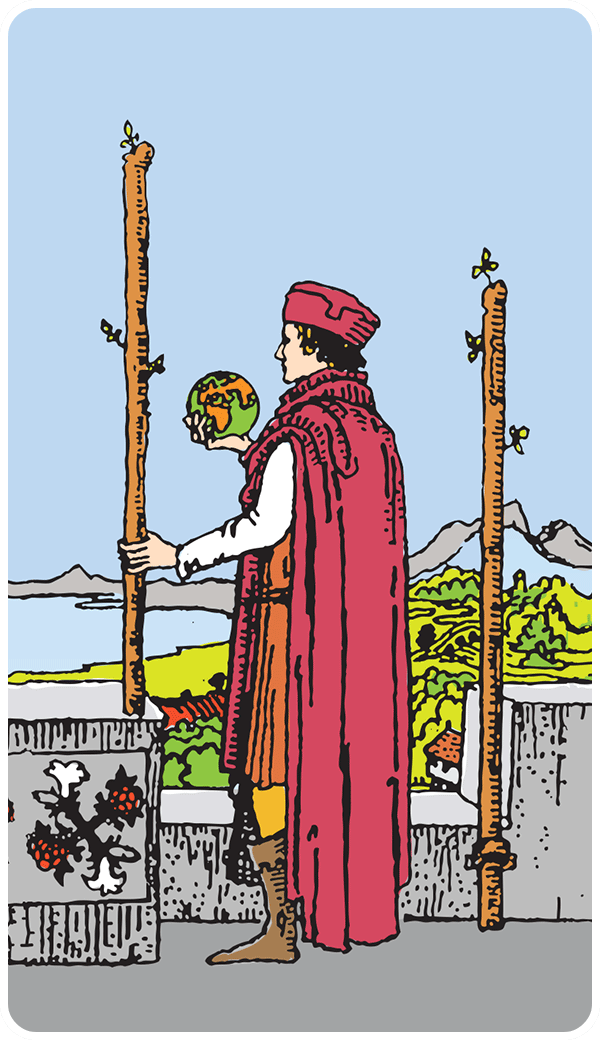 The protagonist of many a story is the one who tends to try the unusual – go for that quirky plan that no one else has thought of. He'll be the one to shoot the gun in the air, so it bounces off the flag post, eventually hitting the bad guy. She'll be the one to suggest marching to the enemy head-on, and then flank them in a position where they least expected it. Everyone around the hero always thinks that they are crazy. /“Don't you know that won't work?/” they often say. Chances are, they end up trying out the plan anyway... to great success. This is the energy of the Two of Wands.

In the Two of Wands, we stand on the wall of what looks to be a lookout post – far below and in the distance we can see fields, valleys, rivers, oceans, mountains, and even a building or two. At this lookout point stands a man – he is well-dressed and holds a long wand/staff in his hand. In the other hand, the man holds a small version of the world... he literally has the whole world in his hands. The man is staring out at all that he can see, contemplating it – the view is a lot to behold, and he seems ready to work with the knowledge that this vantage point has given him.

This card is telling you (yes, you) to seize the day. We often put off big plans and grand ideas until tomorrow. We all find out very quickly that tomorrow never comes – there is only today. The Two of Wands is telling you that today is the day, and you should take the initiative to do what needs to be done. Think your boss is wrong? Tell him so. Think you could blow the stage away? Go audition. Think that step you want to take is too big a gamble? Not today it isn't!


The Two of Wands can also be telling you to go forward with plans that might be a little different than usual. Just like the hero in many stories, your plan might not be the most obvious approach... but it might just be crazy enough to work.

The Two of Wands promotes action – here are a few questions you can ask yourself to get started. What is it that you want to do? What is that one thing you've been holding back on doing? What could you gain by going forward with it now? What do you have to lose? Can you face your fear to do what needs to be done?

There are many cards that pair alongside the bold, fierce nature of the Two of Wands: The Chariot is one of them. Both the Chariot and the Two card celebrate personal boldness – they urge the reader to go out and change the part (or parts) of their lives that need changing. The Emperor is another one with some similarities to the Two of Wands. The Two of Wands promotes directional behavior and putting your foot down, just like the Emperor would.

What Two of Wands Means for You Today

When the Two of Wands appears in your reading it is a sign that you are trying too hard and could even cause indirect harm if you continue on your path. More planning is still needed or it is possible the universe is discouraging you from a certain action entirely. Make sure your current goals are rooted in the right reason so you don't blindly chase your ambition to a place you never wanted to be. Trust in the slow but thorough nature of the universe to remove obstacles and present you with options and courses of action that feel right and make sense. Everything is easier when you work with the universe instead of against it.