The hanged man is like someone who owns a franchise and has delegated all his duties to others. Running a franchise would be impossible by yourself, you need to hire employees, managers, accountants, etc. When a franchise is created effectively, the bus drives itself. The work you put into building a business franchise will pay off in the long run, it just requires a lot of work in the beginning.

There are several already existing franchises that you can buy into and run your own chain. People do this with restaurants all the time. This is a good way to run a franchise without having to start from scratch, which is something only people with large sums of money can do. 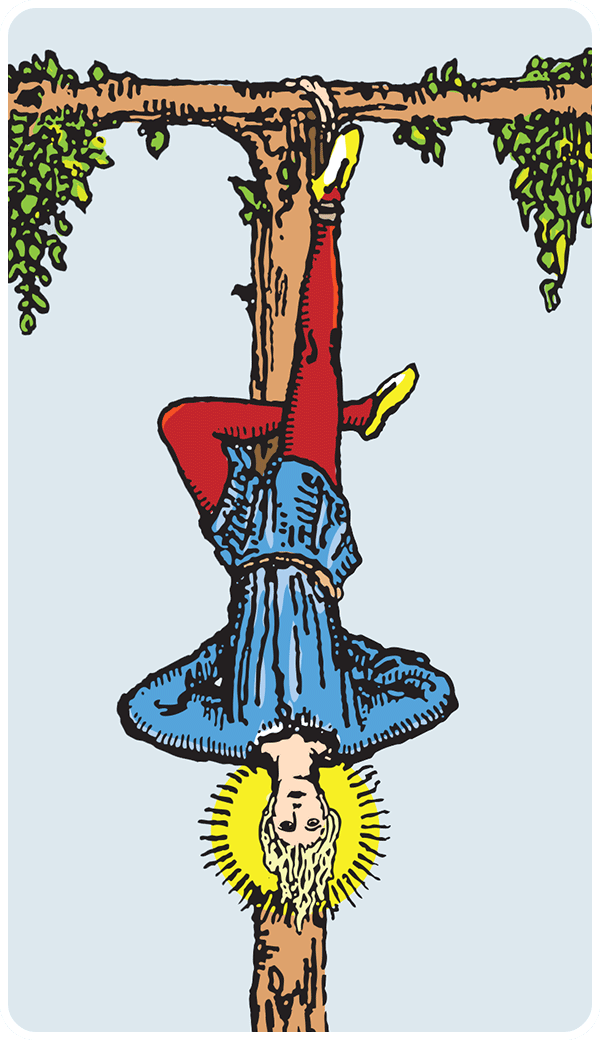 Many people know the classic symbol of the Christian cross, and what it stands for. The man Jesus was tortured and hung upon one – it's where he uttered the phrase, 'Father, into your hands I commit my spirit' before dying. The message that he left with that phrase is one of trust, one of release, and one of acceptance.

With this acceptance, he rose to a greater plane – of both understanding and life. He took that time on the cross, where a man is expected to die and suffer, and not only learned from it... but became better because of it. He took his situation and reversed the circumstances. This is the lesson of the Hanged Man.

On this card we see a man hanging upside-down, dangling from a tree by one foot. He wears a simple blue jumper, red tights, and yellow shoes – the picture of a peasant. His foot is tied to the tree, a rope knotted around his ankle. Most people in this position would be struggling, or at least upset... but the look on the face of the man is one of peace and understanding. The man even has a halo around his head, to note that he is touched by the holy.

The first lesson to be learned from the Hanged Man is that of acceptance. The man isn't struggling, mourning, or even unhappy. He has accepted his fate – he not only hangs from the tree, but he seems to have learned something great and powerful from being there.


A great but mildly complicated message of the Hanged Man is power in sacrifice. By giving away his power to move freely, he has gained a new kind of power and knowledge. We run into these moments in our lives all the time, but very rarely do we accept them with grace. This card may be asking you to stop, take time to think and sacrifice one good thing for an even greater thing.

When You Let Go of Control, You Gain It

Lastly, the Hanged Man asks us to have a bit of faith. Not everyone is willing to hang from a tree, sacrificing all free movement. Why should they? How do they know they will gain anything out of it? To hang from that tree, we must believe that we will discover more about ourselves and the unknown than we would if we were standing on the ground.

If you've pulled the Hanged Man card in a reading, you'll need to question yourself a bit. What sacrifice could this card be asking of you? Can you have faith that silence and stillness will bring you a great reward? Can you put aside fear to embrace new-found wisdom? Can you accept that there are certain things you simply cannot pursue or do?

What The Hanged Man Means for You Today

When the Hanged Man appears in your reading it is a sign that a more spiritually oriented perspective is necessary. The secret of this card is that the man hanging is an enlightened being who knows that when he stops trying to control things they will take care of themselves. The universe already works, it is a perfect orchestration of infinite possibilities, ever unfolding into a finite experience. It doesn't need us to control things, yet we try and try. There is an old Taoist saying 'When the master does nothing, there is nothing that goes undone' - meaning we can ride the waves of life itself and relax until the universe presents us with the next necessary steps.