The Six of Pentacles represents the willingness to donate as well as receive. Donation is a great way to help others and feel like a good person. Donating food, money, or blood are all great ways to give to others. In some cases, donations can get a tax break and the benefit of supporting a valuable cause. Another way to be helpful is to donate clothes to a local homeless shelter. The universe rewards generosity.

Online donations can be made to foundations like the Red Cross within just seconds. Using your Paypal account or credit card, you can donate as much or as little as you'd like. There are plenty of people who are less fortunate and your donation could go to good use. 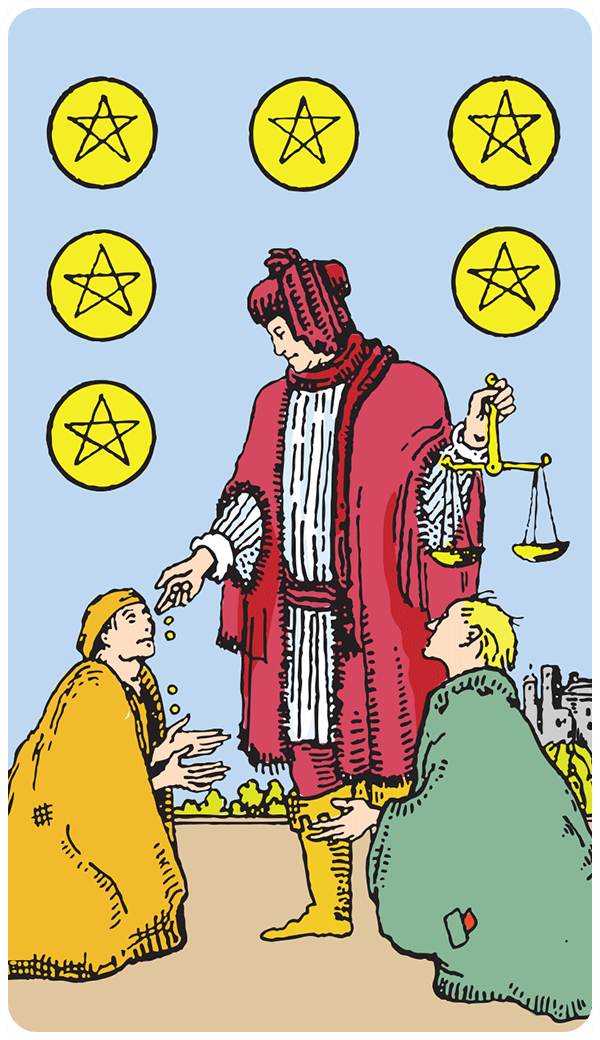 Ever hear around that holidays that, “It's better to give than it is to receive”? The Six of Pentacles card works further along that train of thought, to get into it – if you're receiving a gift of charity, who is it that is becoming more wealthy? When you give a gift, on the surface level it may seem as if you are losing out. Ask anyone who is giving a gift, however, and they'll assure you that they are getting more by giving away than they could if they were the one being given the gift, or if they had given that gift to themselves instead!

Before us we see two beggars, kneeling on the ground – their cloaks are tattered, torn, and patched in places. The beggar's faces are worn and gaunt, their hands thin, their hair tussled. Between these two poor men begging is a man of affluence: you can tell by his rich red clothing and his fancy hat that he is a man of wealth. With one hand, the man is pouring coins into the thin hands of one of the beggars, and with his other hand, he holds a weighted scale (akin to the one that Justice herself holds).

The Six of Pentacles is a card that is all about questions – rather than giving you the answer with a picture, it asks you to question yourself and respond as truthfully as possible. Only when you answer with deep truth can you attain the deep wisdom this card holds in store.

Sometimes Recieving Gives Someone the Gift of Being Able To Give

What about the beggars? Don't they have the power to gather coins in their own way? They also have a chance to make money when they want – by begging. In the end, they received what they needed, despite needing to go to unconventional means to get it. This card is telling you to double-check your own life: who really has the power?

Lastly, the card asks this question: which one are you, the man who is giving or the one who is receiving? In your life, what do you end up doing more? What would you like to be doing more? How can you alter your life to follow the path you really want to follow?

What Six of Pentacles Means for You Today

When the Six of Pentacles Shows up in your reading it can be a sign that you need to open up to the idea of receiving. The universe can only give you as much as you are willing to receive. Relaxing and switching into a more passive mode of existence can open the doors for more abundance to come into your life. If you are already wealthy and have more than you need, this card can be a sign that you should help someone out if you encounter a person who is in need. Of course, you should be discerning and make sure your gifts won't be squandered.